As an Amazon affiliate, we earn from qualifying purchases. We get commissions for purchases made through links in this post.

Braun’s Series 9 9370cc electric razor is the brand’s most luxurious shaver to date. It’s the costliest, the most precision manufactured and the most dynamic model Braun has ever produced so it’s fair to expect something really special. Let’s take a closer look to see if the Series 9 9370cc is worth all the hype.

The Series 9 9370cc is at the highest end of Braun’s line of mens’ electric razors and is designed to be a true luxury shaver.

SyncroSonic technology uses cross-cutting motions to ‘see’ the arrangement and density of a user’s facial hair and adjust its cutting power accordingly.

Precision-engineered cutting mechanism lifts hairs off the face to ensure a clean cut every time.

Rotational head contours to the face and neck for a close, comfortable shave without snags or irritation.

The Series 9 9370cc is Braun’s take on a high-end luxury shaver so no expense has been spared trying to create a razor that does it all. Whether you’re tackling a short five o’clock shadow or a longer four-day beard, this nifty little device has a variety of features and accessories to get the job done quickly and comfortably.

The Series 9 9370cc’s impressive 4+1 Pro Head is made up of five key parts: two Optifoil shavers, a direct-and-cut trimmer, a life-and-cut trimmer and a protective skin shield. These features combine to create a shaving experience that’s efficient without being abrasive or requiring too much weight or pressure. The dual trimmer system ensures that no hairs are missed even if they’re laying flat or growing against the grain.

This electric shaver is waterproof so it can handle a heavy dousing in the shower and won’t complain if you drop it in the tub. Waterproof means fully waterproof so rinsing the head and blades under a running faucet is a quick way to clean it. It’s a handy feature but, admittedly, almost all contemporary shavers are waterproof these days so, while it adds to the Series 9’s arsenal, it’s not something you can’t get in a lower-priced model.

The shaver’s blades are titanium coated both to prevent rust and help them cut as close as possible for as long as possible. It also has a travel lock mode that stops the device from switching itself on if jostled around in a bag or suitcase. So you don’t have to worry about getting to your hotel and finding out the battery in your shaver is dead.

The Braun Series 9 9370cc really shows its star power with its SynchroSonic cross-cutting technology. This remarkable arrangement of blades performs a staggering 40,000 cutting movements per minute, all while using its ultra-sensitive technology to map the thickness and length of the user’s facial hair up to 160 times per minute. It sounds like science fiction technology and though it’s not quite Back to the Future, Braun’s SynchroSonic system is an utter delight to play with.

By making the Series 9’s blades hyper-flexible and hyper-sensitive, Braun has created one of the most responsive electric shavers on the market. Its head is constantly adjusting and readjusting as it meets individual hairs resulting in an extremely accurate shave with no irritations or unsightly razor burns. Most guys are going to buy the Braun Series 9 9370cc for grooming their facial hair but the SynchroSonic technology means it’s also one of the safest tools for shaving the scalp.

Braun clearly listened to customer feedback because the Series 9 9370cc has 20% more battery life than its predecessor. That gives it a lifespan of sixty minutes per charge which equates to several weeks of shaving without having to plug it in once. Guys who don’t shave every day could easily go for months on a single charge.

Another standout feature is the inclusion of a five-minute quick charge function. It’s a really clever addition because let’s face it, long battery life is great but losing track of how much charge it has left is inevitable. The quick charge allows users to build up enough juice in a completely dead battery for one emergency shave. It does take quite a while to charge the shaver to full capacity but, once fully juiced, it’s good to go for several more weeks.

In recent years, top brands have started to wow with their shaver’s self-cleaning functions. Thankfully, the Braun Series 9 9370cc keeps up with the competition. As well as including titanium-coated blades with their antimicrobial properties, the manufacturer has updated the Clean and Charge station used by several of its reusable razors. It works in conjunction with Braun’s Clean and Renew cartridges which slot into the cleaning station and provide the detergent and lubrication needed for a really good wash.

There’s only one Clean and Renew cartridge included with the purchase of the Series 9 93700cc shaver itself so users need to buy more if they want to keep using the auto-clean function. When we first checked out these refill cartridges, we were a little concerned about price – they’re not eye-wateringly expensive but still an ongoing expense – but felt much better when we realized each cartridge is good for thirty cleans. It works out to about one dollar per clean and it’s money you’re already saving by having a reusable razor.

What’s more, the shaver’s auto-clean function requires minimal input from the user. Just position the Clean and Renew cartridge in the right spot on the Clean and Charge stand. Then, position the electric shaver itself with the head facing downward and hit the power button to begin the clean. There’s also a handy little indicator on the shaver’s body to tell the user when it’s time to wash the blades.

Shaving Quality and Ease of Use

There’s a significant price difference between earlier Braun models like the Series 7 and the Series 9 9370cc. For this reason, the newest, sleekest iteration of the Series 9 won’t be for everybody and Braun knows it. There are plenty of budget and mid-range electric shavers available so rather than trying to convince Average Joe that the 9370cc is great value, the manufacturer has pumped it full of premium features to justify its steep price tag.

This isn’t the electric shaver to buy if you want a good, solid mens’ razor with no bells and whistles. But if you want to treat yourself to one of the most luxurious shavers on the market, you can’t go far wrong with the Series 9 9370cc. It’s elegant, it’s extremely responsive and it feels different in the hand. It’s noticeably weightier than the Series 7 because of that five-part head but it remains easy to stroke, glide and turn against and over the skin.

The truth is, it’s hard not to feel like the Braun 9370cc is a bit too advanced for a simple shave. It performs beautifully – being left with no razor bumps afterward is always a pleasant surprise – but the model’s technology is probably more sophisticated than it needs to be to do a really superb job. It’s definitely an overperformer.

The shaver’s side-mounted trimmer is a neat addition particularly if you’ve had issues with awkwardly positioned trimmers in the past. It extends past the device’s head making it much easier to actually see what you’re cutting.

Final Verdict – Is the Braun Series 9 9370cc Worth Your Money?

There’s no doubt that the Braun Series 9 9370cc is one of the best electric shavers on the market today and possibly even Braun’s finest. It delivers a truly premium shave with few downsides and its high quality means it will last for years even under heavy usage.

The only sticking point is the 9370cc’s ample price. There are lots of lower-priced electric shavers that can give you a great result that’s not far behind this one, but the reliability and features of cheaper shavers might leave you feeling stuck in the past.

With that being said, if price weren’t an issue for most people, it would, without doubt, be the number one electric shaver on our list. There are no other downsides except for a lengthy charge time and that can be avoided by never letting the battery run completely dry.

If it’s the most luxurious shave you’re looking for, the Braun Series 9 93700cc is certainly the right choice. You’ll feel like a king every time it touches your face and, well, who can put a price on that? 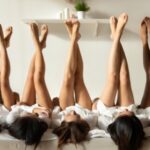 How to Shave Your Legs with an Electric Razor

Shaving Soap Vs Shaving Cream – Which Is Best?

A quality shaving cream is more moisturizing than a shaving soap. Shaving creams produce a richer and creamier lather that is more cushioning and lubricating. Moreover, the modern cream allows for easier and quicker shaving cherished by both beginners and wet-shavers. However, the soap also has its benefits and is popular for affordability and easy […]